Since 2014 KiN has been installing fibre-optic cable within Kaslo, which is unaffected by distance, has far greater capacity than telephone-based service and can provide the Internet speeds enjoyed in major cities.

KiN’s fibre-optic Internet service is maintained by employees who live here, so problem-solving and support are quick and responsive.  New connections are free and KiN’s monthly rates match or beat those of the phone company.  A fibre connection to a residence increases property value by about $2,000.  And whereas more than $10,000 is drained out of our community every month by the phone company for Internet service, KiN’s subscription fees are spent at local businesses and for local employees’ wages.  For information about KiN,  please contact us at (250) 353-2305 between 9 AM and 1 PM weekdays, or visit www.kin.bc.ca. To request a fibre-optic connection, please fill out this form. The map below is also posted in the hallway outside our office. 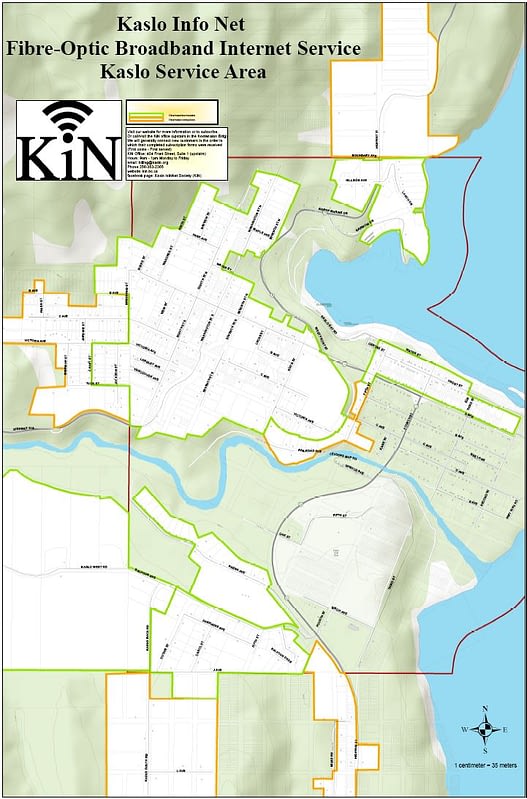 Over the next few years, KiN will be bringing Fibre Internet services to most communities on the west shore of Kootenay Lake.

Much of this area is currently served by KiN with wireless Internet service by the network of towers and wireless access points that have been built over the last decade. The current all wireless network suffers from several technical limitations that limit the speed and capacity of the network. The fastest speed we are able to offer is a 10 megabit connection, and that is limited by the capacity of the backbone network, and then the line of sight quality of the link between the backbone network and the subscriber radio system. Most users struggle to maintain a useable 3 to 5 megabit connection with the major issues being foliage and tree growth between subscriber locations and the network access point, interference from adjacent radios and varying atmospheric conditions throughout the year.

When KiN began building fibre optic networks in Kaslo in 2014 we began engineering a combination of local fibre networks to replace subscriber radios and using a single high capacity AirFiber Radio link to replace the access point radios. This has allowed us to increase both the capacity and quality of service.

Instead of 1.5 to 10 megabit service with each radio subject to local conditions at each subscriber’s location, we are able to deliver 10 to 50 megabit service and maintain only one carefully chosen radio location. The speeds we offer on Fibre systems are limited only by the AirFiber link and the backbone network it is connected to.

Not every location or subscriber can be served with AirFiber to Fibre systems, but as far as possible we will build these out and this will also reduce congestion on the conventional wireless systems that remain.

Today our backbone network is all AirFiber from the CBBC network location in Crawford Bay. This too is about to change. Construction is about to start on a submarine fibre cable system from a CBBC feed point in Balfour that will expand our current capacity thirty fold with ongoing capacity for further expansion. This construction project will bring that capacity to Kaslo this year and further up the lake next year, and provide the capacity to extend 50 megabit service to most of the West shore in the next few years.

These projects are expensive and time consuming to carry out. We will be working in multiple locations throughout the area for the next few years. In some cases, the timing is determined by the provincial paving schedules as we try to make road cuts for fibre before the province repaves.

Funding to carry out these projects has come from provincial and federal governments, Columbia Basin Trust, and from monthly KiN subscriber revenues. Our goal is to provide internet service comparable in cost and capacity to what citizens in the major cities receive. Internet services in Canada typically cost from $50 to $100 per month whether you live in a big city or the West Kootenays. What you get for your money varies very widely. We are dedicated to improving the speed and capacity for all of our subscribers on both fibre and wireless networks. Over the long term, we hope to replace most of our wireless network with fibre wherever possible. If you have further questions please contact us and we will try and answer them as quickly as possible.

You can find out more about which cookies we are using or switch them off in settings.

This website uses cookies so that we can provide you with the best user experience possible. Cookie information is stored in your browser and performs functions such as recognising you when you return to our website and helping our team to understand which sections of the website you find most interesting and useful.

Strictly Necessary Cookie should be enabled at all times so that we can save your preferences for cookie settings.

If you disable this cookie, we will not be able to save your preferences. This means that every time you visit this website you will need to enable or disable cookies again.